A homesteader looks at the first Christmas 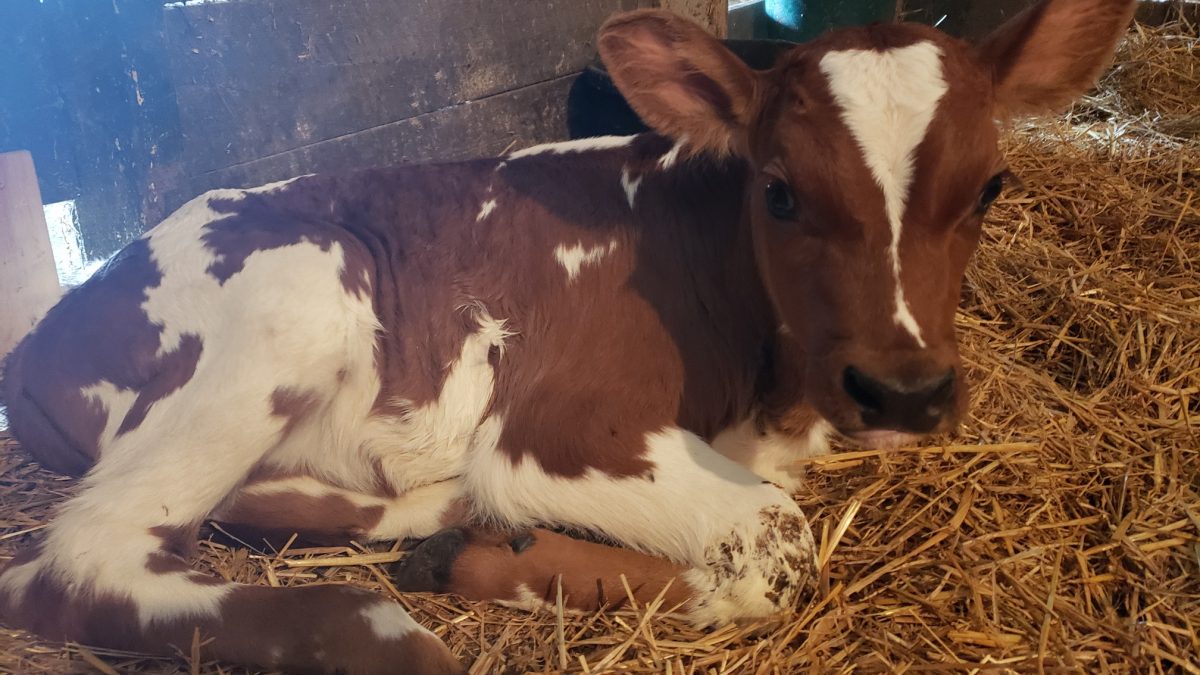 Beefcake as a calf

With so many of the holiday traditions we enjoy as a family closed or at limited capacity this year, I started to get a bit Scrooge-like in my disappointment. Then the thought struck, “Well, why don’t you do something?” That is how my husband and I ended up hosting an event for the community that we titled “Bethlehem in the Barn” – a look at the very first Christmas.

We had two weeks to prepare. This included laying out the itinerary, publicizing it on social media, and enlisting the help of several dear friends to supervise caroling, parking, refreshments, animal interaction, and the bonfire. After the preliminary details were ironed out, my family and I began a vigorous clean-out of the barn, including preparing stalls, stacking hay bales, and mucking out a lot of manure.

We bought cider and cocoa and candy canes, and all the ingredients needed to provide cookies for the fifteen families we anticipated coming. My husband painted signs to direct vehicles, and together we dug a foot of snow out of the firepit. We strung Christmas lights over the vacant paddock, and did a “fun facts” sheet for each animal our visitors might inquire about in our barn; meanwhile, my children packaged snack bags of animal crackers and mini hay bales so that our guests could enjoy feeding the livestock.

To compound our flurry of labor, we were hit with a blizzard just three days before the scheduled event – unusual where we live for sure, where we seldom get significant snow until mid-January, and where we haven’t experienced a White Christmas in years. And so we turned our energy to scooping out parking spaces and pathways through the foot of snow.

Mayhem in the barnyard

With a half hour before visitors were to arrive, one of the ewes got loose as we were shuffling animals from the pasture to the barn. Dixie was half jubilant, half terrified to be on the other side of the fence in freedom. She kicked up her heels and tore across the yard, threatening to trample my first year grapevines, before trotting over to nose some startled hens. Vainly I pursued her on her hedonistic romp, imagining how ridiculous it would look to our arrivals to see the lady of the place chasing and coaxing and cajoling, and generally being outwitted by, a sheep.

Animals are so unpredictable, I thought as I at last guided my errant ewe back to the gate. I wondered how cheerful Mary could have been to have unmedicated labor in a barn, surrounded by the noise and antics of bovines and ruminants.

Guests were arriving and our program began. And my eyes were opened in a new way to the reality of that first Christmas.

Elvin, our wonderful Christmas storyteller, was interrupted several times by our steer Beefcake. Sketchy to me now is the idea that the lowing of cattle wouldn’t cause a baby to cry (per the beloved Cradle Song). When Beefcake voiced his presence, I saw some folks jump. 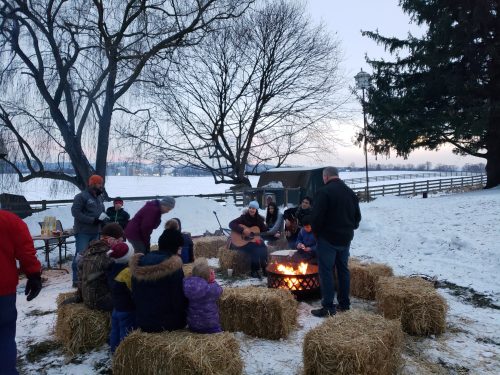 Christmas caroling around the fire

At one point during the reading of Luke 2, Bernadette, my Alpine goat, stood on her hind legs and leaned over to nibble my knitted hat. The kids especially enjoyed this unscripted piece of the story. 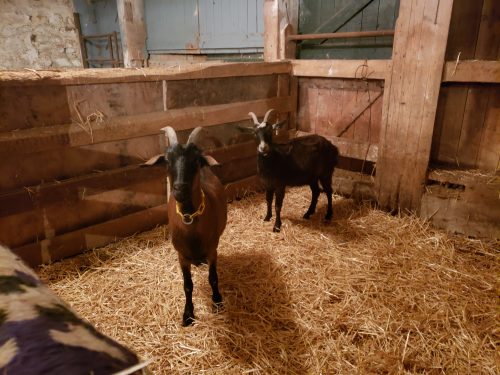 Bernadette and Charlize, our Alpine goats, played a key role in the production

While goats may not always be included in a nativity scene, it struck me for the first time that there may well have been goats present, either being kept in the stable or as part of the shepherds’ flocks. Goats play a significant role in the holy land and are mentioned 155 times in scripture, not far behind the frequency of sheep (197 times). In fact, when scriptures mention drinking milk, it was pointed out to me that most likely these instances were referring to goats’ milk, not that of cows.

One man pointed out following the reading of the Christmas story that shepherds were known as the telephone wires of the day, the news couriers, since they were nomadic in their work and rambled between towns and cities chatting and exchanging the happenings. It is conceivable that one reason God chose the shepherds to receive these glad tidings is that they would spread the news far and wide, simply by nature of their trade.

A menagerie of manure

There’s no way around it. Standing in the barn surveying the frolicking goats, the snorting calf, the rabbits, the quail, and the sheep, there had to have been plenty of poop at that first Christmas. For sure this is something else consistently omitted from sacred scenes. Such an undignified way for the Lord of the universe to enter His world in human form, that no one could have made it up. We in fact blush to admit it.

Humbling, between that of the animals and the Baby Himself, excrement was all around him. A fitting initiation perhaps into the world in which our Redeemer was coming – a world He’d intended from the beginning for mankind to subdue, discover, enjoy, cultivate, and rule (Genesis 3, Psalm 115:16, Daniel 4:17), now torn apart and wretched and groaning because of our authority usurped by Satan in the garden, and the manifestation of the curse at work.

I am thankful that during a Christmastime when doors all around us were shut, another one – perhaps a better one – opened for us to walk through and glimpse what is vital. 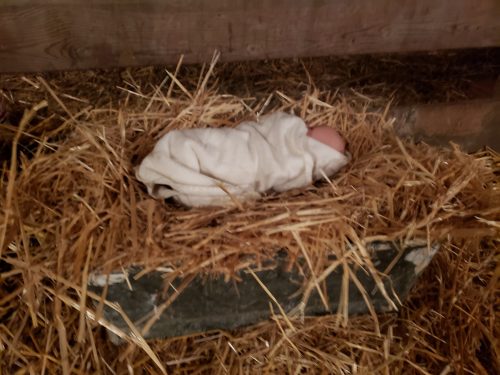 Babe in the manger