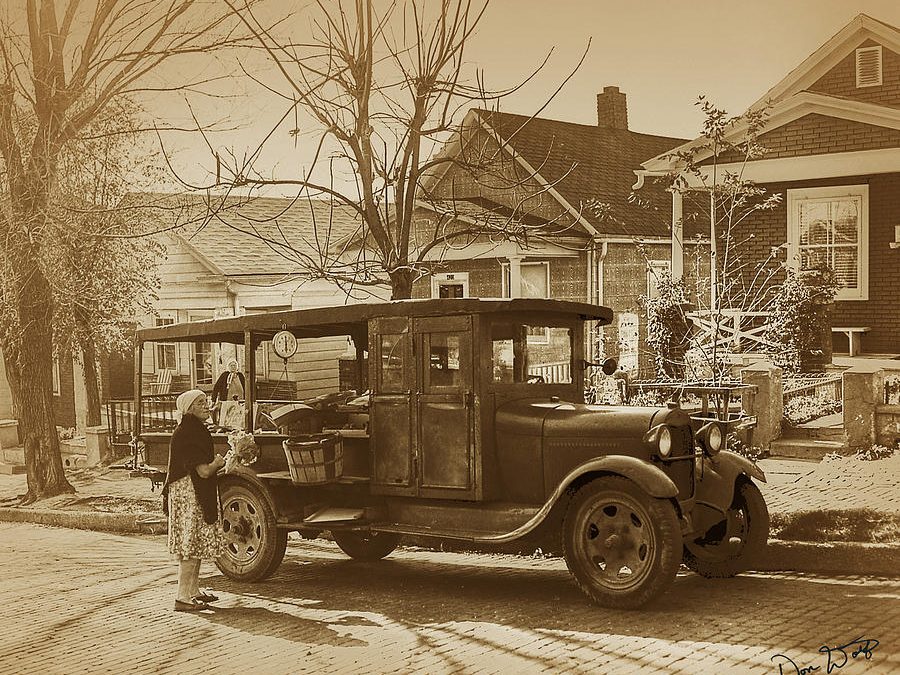 Long before Amazon delivery vans dotted the roads, the means for many to get their goods delivered was the huckster route.

What was a huckster? When neither refrigerators nor automobiles were commonplace in every home, as late as the 1960s, a huckster loaded up his goods to distribute to those in rural areas who might not be able to make frequent trips for fresh grocery items.

My cousin Gail shared her father’s story of accompanying his grandpa out in Western Pennsylvania on his huckster route. “The mines were going strong then, and many of the people working there were Hungarians,” he recalled. “I would go along with [my grandfather] and we would have potatoes, sweet corn, cabbage, and rutabagas; all kinds of stuff: red beets, cucumbers. He would load up the Studebaker (car) and haul it over to Central City and stop at several places along the way where he knew people.”

“The people didn’t speak English and he couldn’t understand Hungarian. But they used hand communications to articulate the price of vegetables and what they wanted. They didn’t have any paper bags, and plastic ones were unheard of. What do you suppose they placed their purchases in? The women carried everything in their aprons. If they had more than they could manage, they sent one of the children back for another apron.”

Sometimes the huckster route was the road taken by the owner of the general store who dispatched items to the farming community, or the town butcher who had an insulated box on the back of his Ford Model A pickup, which he loaded with perishables.

Pennsylvania resident Marce Schultz remembers, “When I was growing up in a suburb of Philadelphia, we had a huckster. He was a man with a horse-drawn wagon, and he led the horse up and down the streets and called out “Potatoes! Carrots! Tomatoes! Fresh green beans!” in a sing-song voice. I don’t remember how often he came, but all the women in the neighborhood came out and bought from him. There was a scale hanging from one side of the cart. My mother always referred to him as ‘the huckster’.” **

Marce adds, “This was in the 1950s, believe it or not. We also had a horse-drawn milkman, and a knife sharpener who hawked his services up and down the street, walking.”

While researching hucksters across the country, I found numerous genealogy groups listing men and sometimes married couples, named hucksters by trade. I also stumbled across a forum in which folks shared their memories. One woman recalls, “The huckster had a regular route through the countryside, stopping at points to sell to housewives (with us youngsters standing around hoping he was in a generous mood to hand out a thin slice of baloney, or maybe a large chip of ice
to suck on). Many a busy housecleaning day we kids were told to “keep an eye out for the huckster wagon.”  ***

At a time when stores aren’t as accessible, perhaps it is time to revive the huckster route. What kind of stories do you have, personally or from your relations, about the local huckster?